Last year, I ran a contest where I posted a picture of a confrontation between two men. I asked for people’s thoughts on the positives and negatives of both parties in the image regarding self-defense. Meaning I wanted people to offer what each person was doing well or poorly if analyzed from a self-defense perspective. I was not even looking at it from the angle of who is the good or bad buy, evaluate the body language from a still shot.

Here are My Top 10 Self-Defense Observations. Remember, this picture is just a moment in time and reality, would always be changing, but I think a photograph can still offer a greater insight into the overall analysis. Okay, so check out the pic for yourself and then I will provide my thoughts. 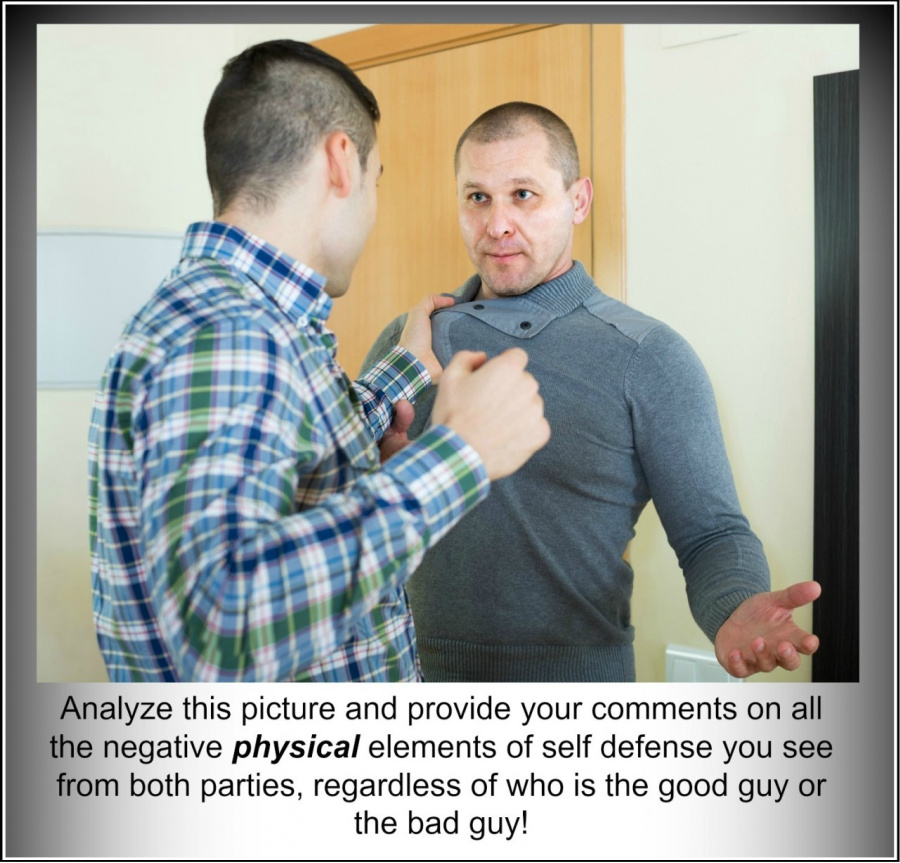 The Good, The Bad, and The Ugly

1) The guy on the left appears to be the aggressor (but maybe not as I mention later) but not the smartest aggressor lol. He has his left hand tied up, grabbing the other guy’s shirt, which we teach is not always a smart strategy. Sure it anchors you making any strikes you throw more effective but also ties up one of your tools in their clothing, which allows the other person to trap it through tactile sensitivity, possibly. And by tying up his hand in the clothing, the likelihood of it being a primary or even secondary threat is most often removed. Sure, it may have some judo or jiu-jitsu applications, and anything is possible, but most often, not be the best strategy for the guy’s left hand.

2) Secondly, he has made it quite obvious what is the primary tool of violence will be. In this case, the right hand is already cocked and ready to punch again, which is a considerable telegraph of intent. Now in real violence, your adrenaline is always increased and very hard to eliminate all telegraphs, but one should do their best in training to show as little telegraph as possible, so when it may come a time in real life, the telegraph is minimal. Also, he may be telegraphing because he has never faced many real conflicts. Hence, his primal response comes out with no thought of strategy. He is so over-confident in who he has chosen as his potential victim that he feels no need to be strategic and will impose his will without any thought the person he has attacked will react adequately. Not many aggressors choose to attack people they feel they can “beat them.”

3) BUT if you look at the guy on the right, his face also indicates he may be overconfident, so it is a toss-up who the original aggressor may have been. Neither guy appears to be very bright lol. You may also think by the look on the guy’s face on the right that he may have said something like, “You don’t have the balls to stand up to me,” or “Come on, bring it on!” Or something to that effect.

4) Another area of concern for the guy on the left would be to see any bystanders or witnesses who may be taking video of the incident because the guy on the left looks like the aggressor. If one outside range heard the conversation, it appears the guy on the right is most likely the victim. Suppose one was explaining to the police or judge as to what they saw. In this day of social media and video of fights or attacks, you can assume you are being videotaped.

5) The guy on the right has both hands down to his side, which is a great way to ensure you get struck. The hand is quicker than the eye. If the guy to the left decides to throw, even an average speed punch, the other guy would have slim to no chance of blocking it because he is closer to the face with his fist while the other has his hands down. His ability to react adequately to a punch at this proximity is limited, which is another reason we always teach to keep your hands up.

7) Now, I don’t think he is trying to be strategic, but the guy on the right is in a good, not optimal position to trap the hand on his clothes and maybe deliver a simultaneous ear or head slap with his left hand, but I am not confident that’s his intent.

8) Neither guy appears to have tried to de-escalate the situation verbally. With body language being the majority of communication, you can see that both got caught up in a battle of ego.

9) Not sure if the guy on the right would have a clue, but having his back to the exit has advantages for escape. Still, having already got himself into the physical aspects of the conflict, he would need to deal with the person in front of him first, but at least he has less of a barrier. If he were to turn his back without dealing with the threat, he would expose his back to the other guy putting him at a significant disadvantage. But again, I think neither guy is genuinely aware of their environment.

10) In the end, I would say neither guy is very strategic and like many fights, whoever throws the first strike is likely going to “win” for lack of a better word cause there is no winning in violence, only survival.